Top Glove: US shipment to resume as early as end-September

KUALA LUMPUR (Sept 17): After more than a year of being prohibited from shipping goods to the US market, Top Glove Corp Bhd said it will resume exporting and selling its gloves from Malaysia to the US as early as end-September this year, following the lifting of the US Customs and Border Protection (CBP) ban effective Sept 10, 2021. 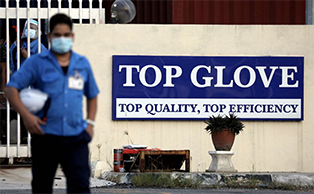 Its executive director Lim Cheong Guan said the company has been maintaining good relationships with its US customers and has been regularly liaising with them, hence these customers are all ready to do business with the company after the import ban on Top Glove's subsidiaries was lifted.

"A lot of them are happy to deal with us, because they know that by now, Top Glove is the only one that has been verified, audited and also tested very thoroughly in the area of forced labour. So, these US customers are happy and they are getting ready (for the glove shipment to them). I can tell you that now the shipment (to the US will be resumed) in early October, or maybe even before that... at the end of this month, because we have goods that are ready. So it's just a matter of printing their packaging materials and sending out to them.

"We are confident that we will retain our customers because they know that we have the capacity and capability. They know that one of the ways to grow bigger in (their) industry is to have a strong supplier like Top Glove to be on their side," he told a virtual press conference held in conjunction with the announcement of the group's latest quarterly results.

Against this backdrop, he also said this positive development is expected to boost sales from Top Glove's Malaysian operations to the US, which accounted for 15% of the group's total sales for the financial year ended Aug 31, 2021 (FY21).

On March 29 this year, CBP directed personnel at all US ports of entry to begin seizing disposable gloves produced in Malaysia by Top Glove.

Subsequently, while Top Glove said in April it had resolved all indicators of forced labour found at its factories, the ban remained in place. In May, a total shipment of 3.97 million nitrile disposable gloves made by a subsidiary of Top Glove worth US$518,000 (RM2.13 million) was seized by the CBP.

On Sept 10, Top Glove announced that Top Glove Malaysia was in the clear and allowed to resume exporting and selling gloves to the US following modification of the finding by the CBP effective Sept 10, 2021.

The world's largest glove manufacturer, whose share price has tumbled more than 50% since the ban, ended 14 sen or 4.38% lower at RM3.06. At the current price, it has a market capitalisation of RM25.11 billion.

Next» Is China Exporting Inflation?